“Angela Dorsey… create(s) books which have something for everyone. Those who like adventures, excitement and danger will love them, and those who like a little bit of depth and character development to sink their teeth into, will also get a lot out of them. Fans of both the supernatural and realistic plot will also enjoy the stories equally. In this way I think they appeal to a wide range of readers and also a wide age range.” ~PM Book Lovers

WHINNIES ON THE WIND: THE COLLECTION – Get all nine books in one handy ebook – a complete collection! 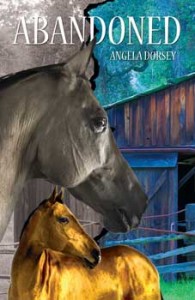 ABANDONED – A stranger is stalking Lauren, so her dad sends her to stay with his sister. What Lauren finds at her aunt’s house is both terrible beyond belief and more amazing than she can imagine!

FREEDOM (aka A Horse Called Freedom) – Jani encounters a vicious ghost horse in her barn and sets out to tame it. The audiobook, narrated by Aven Shore, is available HERE!

ECHO (aka Freedom’s Echo) –  Freedom is back, just in time to try to save a frightened young girl – but her own fears may be too much for her! The audiobook, narrated by Aven Shore, is available HERE!

SUN CATCHER – Lost River is the first in her tribe to discover horses when one of the strange, beautiful creatures saves her life.

SUN CHASER – SunCatcher and her horse go deep underground to save an irritating boy.

SUN SEEKER – SunCatcher and her horse try to save their people, but no one is listening.

WHINNIES ON THE WIND SERIES – Evy has a telepathic connection with horses. Too bad it’s of no use in understanding why her hermit mother has the two of them hiding out in the Canadian wilderness.

WINTER OF THE CRYSTAL DANCES – Evy and her horse, Rusty, save the mustang filly, Twilight, from certain doom. The audiobook, narrated by Deva Marie, is available HERE!

SPRING OF THE POACHER’S MOON – Evy, Rusty, and Twilight have a problem with poachers.

SUMMER OF WILD HEARTS – When the wild stallion steals Twilight, what can Evy and Rusty do?

AUTUMN IN SNAKE CANYON – Evy discovers that her mom’s agent is ripping them off and enlists her horses to make things right.

WINTER OF SINKING WATERS – A grizzly is after the cows that Evy and her best friend are watching.

SPRING OF SECRETS – Evy stows away, meets some wonderful horses, discovers some secrets from her past – and gets more questions in return.

SUMMER OF DESPERATE RACES – Saving mustangs and running in the ‘Downhill Mountain Race’ – can it get more exciting?

AUTUMN OF ANGELS – Confronting someone to get the truth is the easy part; escaping afterward? Not so much!

WINTER OF THE WHINNIES BRIGADE – While saving a young mustang, Evy and her horses discover a car in the ditch. Does everyone need saving today?

HORSE GUARDIAN SERIES – Angelica, the horse guardian, protects the world’s horses by enabling girls to save them, from Egypt to Canada, England to Mexico, Argentina to the United States, and more.

DARK FIRE – Nothing is going to stop Lisa from visiting her beloved Jupiter, the horse she was forced to sell, neither her unsympathetic father nor the cruel nephew of Jupiter’s new owner. Then a crime is committed that shakes Lisa to her core, and the police suspect Jupiter.

DESERT SONG – When Sophie unwittingly puts her foster parents most valuable mare, Aria, in danger, she is afraid she will be sent away. So she keeps her mistake secret, hiding Aria in a remote canyon. But little does Sofie know that a terrible evil is drawing near.

CONDOR MOUNTAIN – Elena’s dad is trapped with his horse in the Andes mountains. Above them, the condors are circling, ready to strike. Elena is the only one who can get to her father and his horse in time, but she doesn’t believe they’re in danger – and she certainly doesn’t trust the strange girl who says she’ll help, the girl who rides the wild mare that no one has ever ben able to tame.

SWIFT CURRENT – Ali soon realizes that all the accidents happening on the ranch aren’t really
accidents. Someone is setting traps, trying to scare her. Then the intruder targets her horses. She can’t understand why someone would want to hurt three innocent horses, but one thing’s for certain – she needs to figure it out before something terrible happens! Then the horses go missing. Is she already too late?

GOLD FEVER – On their annual horseback wilderness camping trip, Karlie and her dad run into a bit of unexpected trouble – trouble that quickly turns terrifying. Karlie’s dad is attacked by a murderer, then as he and Karlie escape, they are separated. Karlie knows she must find him and take him to a hospital. But she’s not the only one looking for him. The murderer is looking too, for her dad and for her.

SLAVE CHILD (aka FRANTIC FLIGHT) – Giselle is heartbroken when Madame says she is selling her old pony, Domi, for slaughter. The thought of gentle Domi being killed is too much. But things are worse than Giselle knows. Back at home, a restavec trader is waiting. Giselle’s aunt has just sold him the orphans that were forced upon her – Giselle and her little brother. How can Giselle save Domi when she can’t even save herself?

RATTLESNAKE ROCK – Rosa is faced with a terrible choice. Senor Garcia has offered her a dream job and a mustang colt of her own. If she accepts, five of the twelve mustangs in the herd get to live, her parents keep their jobs, and her friend gets a new assistant. Almost everyone wins. Almost. Seven unwanted mustangs will be sent to slaughter. Can she let that happen? But what choice does she have?

SOBEKKARE’S REVENGE – An ancient treasure is unearthed from an Egyptian cave, and one of the artefacts carries a terrible curse, a fatal illness that attacks horses. When Jumana discovers her family’s prized horses are missing, she follows their tracks into the desert, only to find them with a strange girl. Together, can they stop the curse before all the world’s horses are afflicted?

MYSTIC TIDE – While riding her horse, Talent, across the wild Irish burren, Erin is seized by an unlikely pair, a ruthless woman and her clueless but loyal brother. Erin is terrified. Only one thought gives her hope: Talent escaped their clutches. When he gallops home, her family will know she needs help and will rush to save her. But Talent has plans of his own – and the help of a very strange girl.

SILVER DREAM – Joanna suspects that her neighbour, old Mr. Thomas, is stealing horses. Only his granddaughter knows the truth and she is protecting him at all costs, costs which may include the lives of the stolen horses and the young man who has gone missing. When Joanna investigates further, she discovers a decades-old crime – and finds the person who is still very motivated to keep everything concealed.

FIGHTING CHANCE – Chance and her best friend, Hanna, just want a relaxing ride for their first excursion with Chance’s mare’s foal, Tubby. When they happen upon their mean school rivals, the ride instantly becomes unpleasant, but even that pales in comparison to what is to come. Hanna and Chance are separated, a tornado descends from the sky, Tubby disappears, and then, unbelievably, everything becomes worse!

WOLF CHASM – Caught in a snowstorm with her horse, Clare’s only hope of survival is to take shelter in a cave. Unfortunately, the cave is already home to a pack of wolves. The three puppies are no threat, and neither is their uncle who is injured. However, the very protective mother wolf isn’t one bit helpless. In fact, she is convinced that Clare will kill her puppies – unless she attacks first!

If you’ve enjoyed my books, I’d love it if you’d leave a review. Thank you!